How to make a fondant seal cake topper 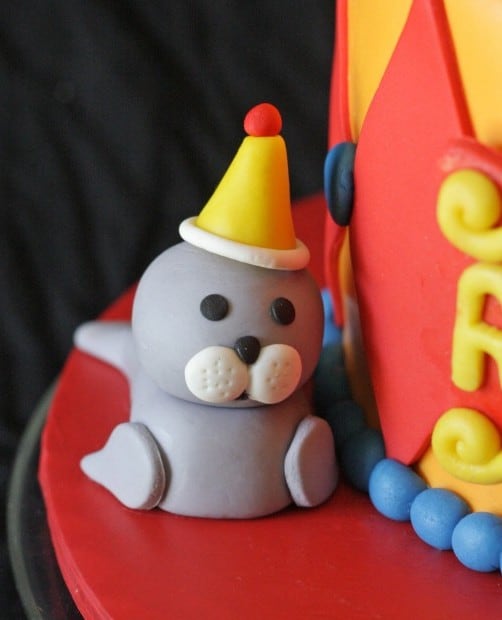 I recently had the pleasure of making a circus themed cake and one of the animals I made was this sweet little fondant seal cake topper. I didn’t have time to photograph the step-by-step tutorial for all of the animals, but this little guy was the first animal I made, so I took lots of pics while making him!

So let’s get started!

Here’s what I used to make this fondant seal:
Gray, black and white fondant
Two other colors for his party hat – I used red and yellow (pictured down in the tutorial)
Rolling pin
Xacto knife or scalpel
toothpick
small teardrop cutter
lollipop stick
styrofoam cake dummy
black marker (optional for his mouth)
sugar glue and food-safe paint brush (not pictured)

Take the ball of gray fondant and shape it like a narrow wedge. 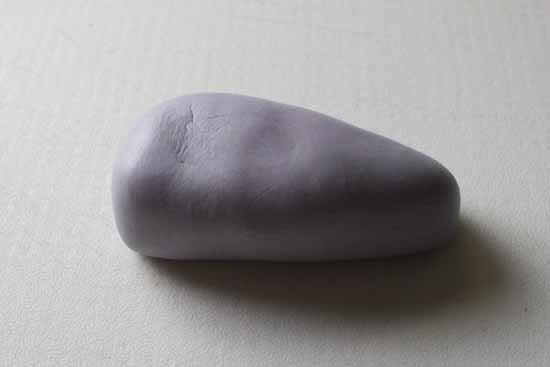 Using your fingers, flatten the narrow end to begin making the seal’s tail. 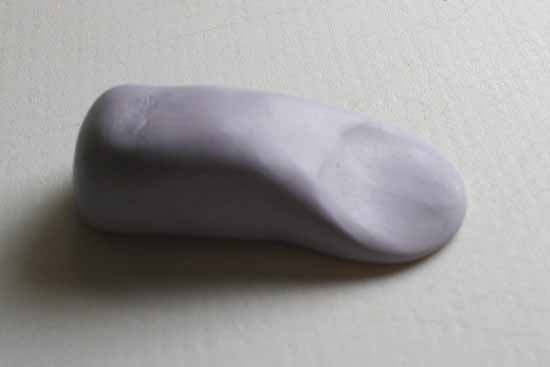 Take a sharp blade and split the tail. 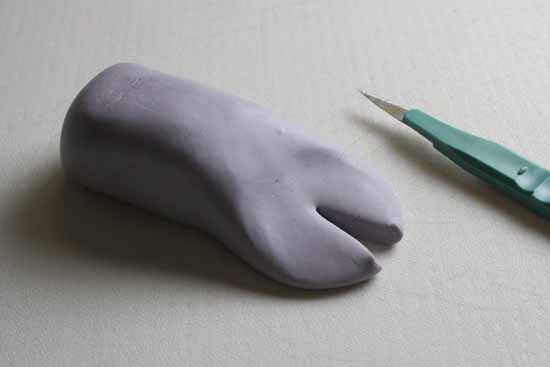 Use your fingers to curve and shape the tail. 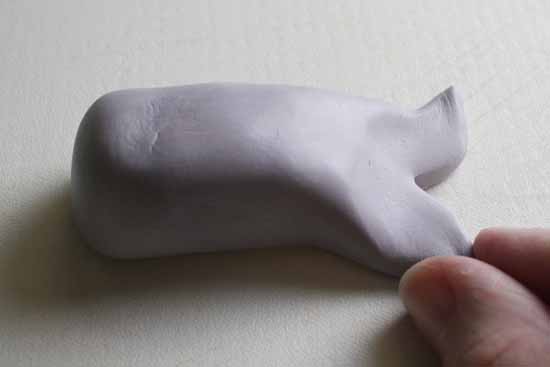 Make a smaller ball that will be the beginning of the seal’s head. 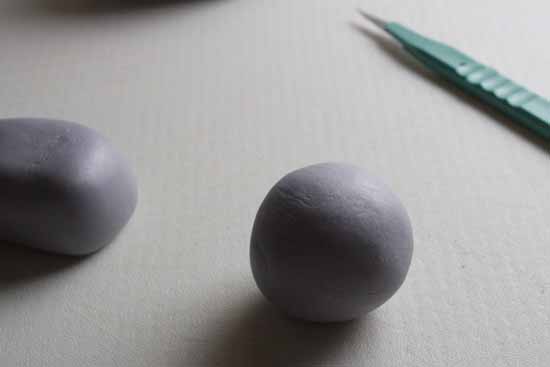 Insert the lollipop stick into a cake dummy leaving about 2 inches sticking out.  This will be where we assemble the seal and let him harden. 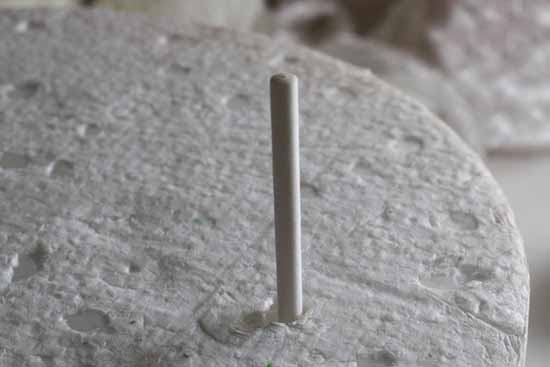 Push the body of  the seal onto the lollipop stick – centering it near the “front”. 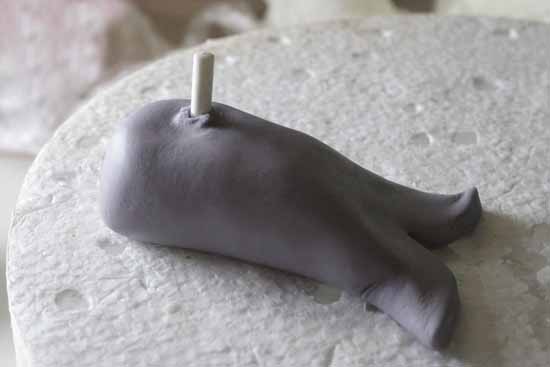 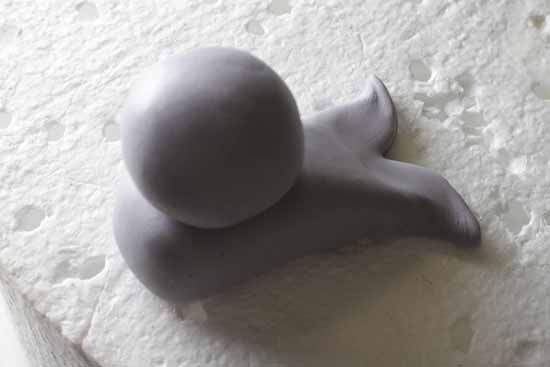 Roll two small balls of white fondant and then glue them onto the front of the seal’s head for his “cheeks”. 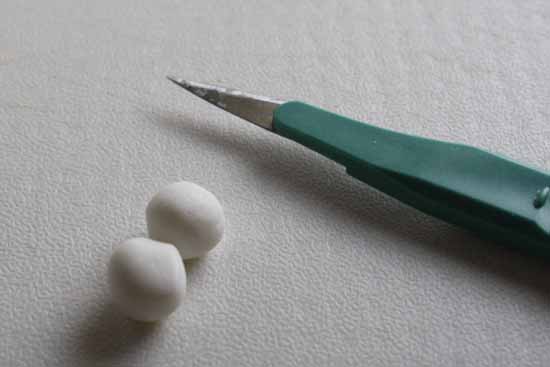 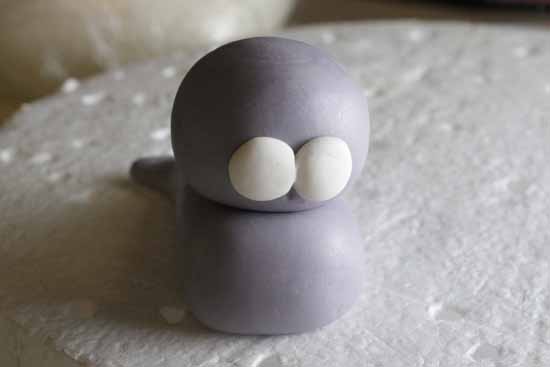 Roll three tiny balls of black fondant – two for his eyes and one for his nose.  Press those onto the seals face – use a tiny dot of sugar glue if needed. 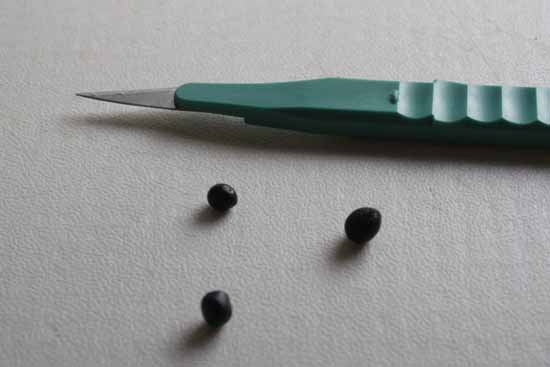 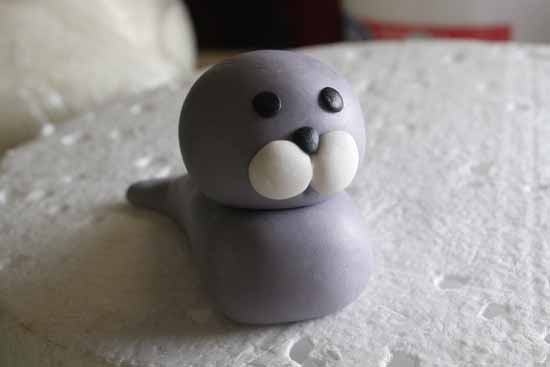 Using a toothpick (of a gum paste tool), make tiny indentations on the seals cheeks where his whiskers would be.

Optional: use a black food marker to draw a black spot under his “cheeks” for his mouth. I did it but you can barely see it in the pictures, so you could skip that step and nobody would notice! 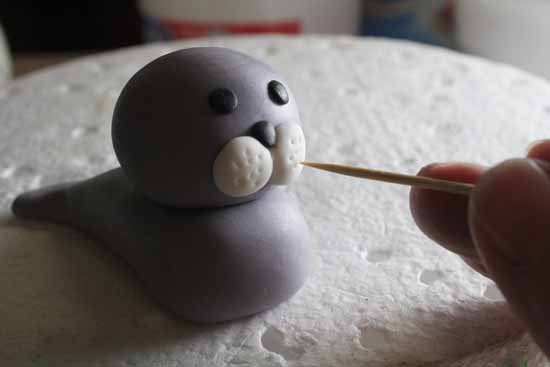 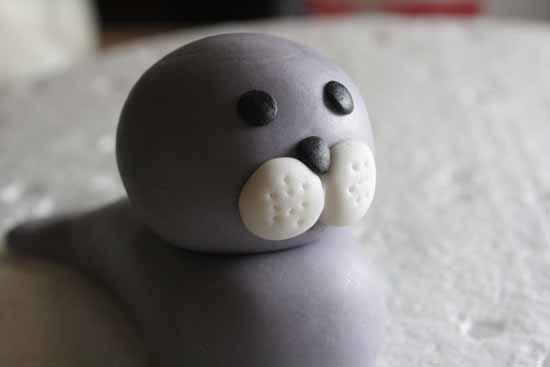 Roll out some gray fondant and use a small teardrop or comma shaped cutter to cut out his flippers. Use sugar glue to attach them to the sides. 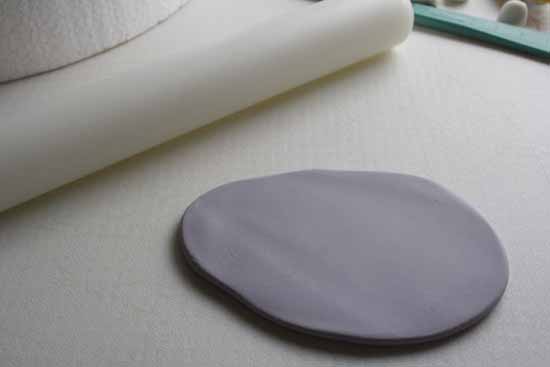 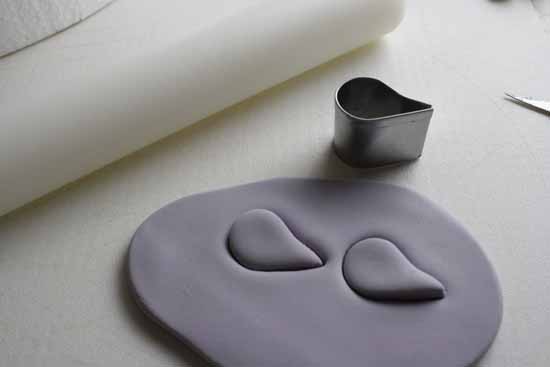 You could call him finished at this point – but I think he really needs a party hat… don’t you? 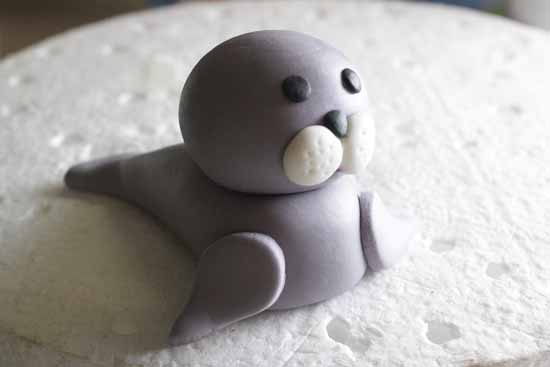 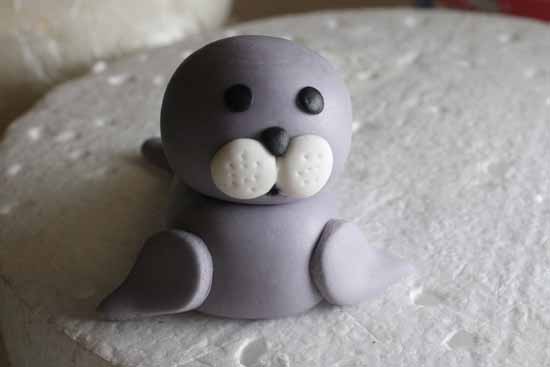 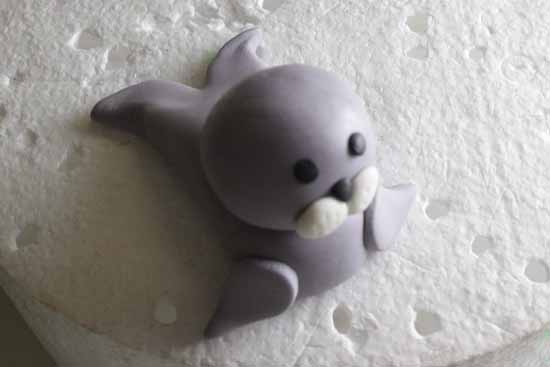 Using red, yellow and white fondant, I made him a party hat!  You could change up the colors to any that you liked! 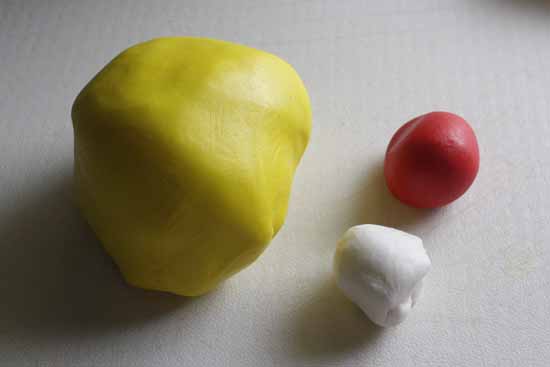 Start by taking a small piece of fondant and rolling it into a cone shape: 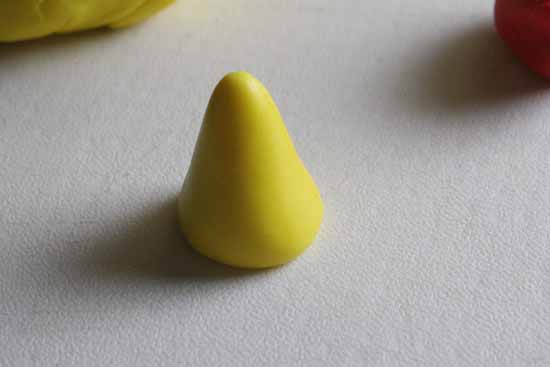 Roll a tiny ball of red fondant and glue it to the tip of the hat. 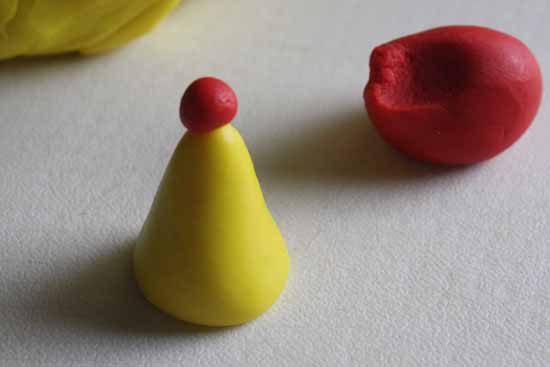 Roll out a small rope of fondant, then cut it and glue it around the base of the hat. 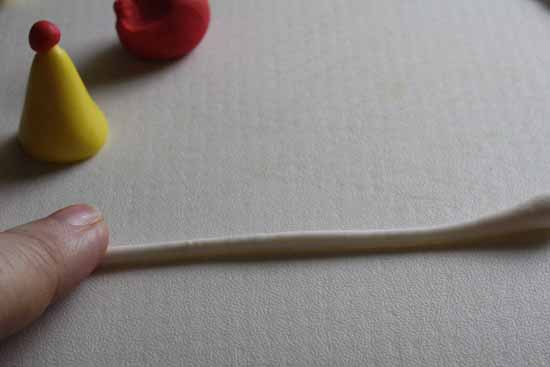 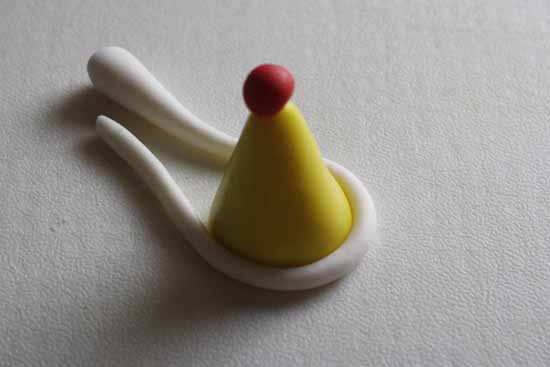 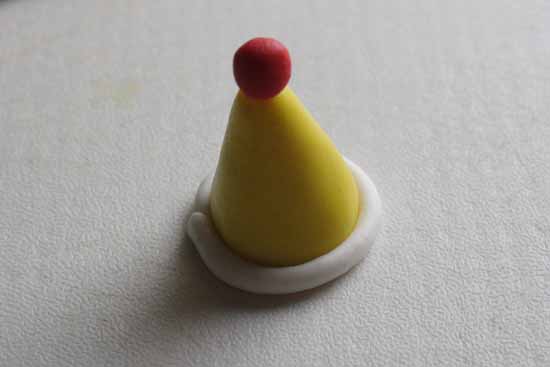 Insert the toothpick into the top of the seal’s head, then push the hat onto that.  You may want to paint a small amount of sugar glue between the two to help it stay in place. 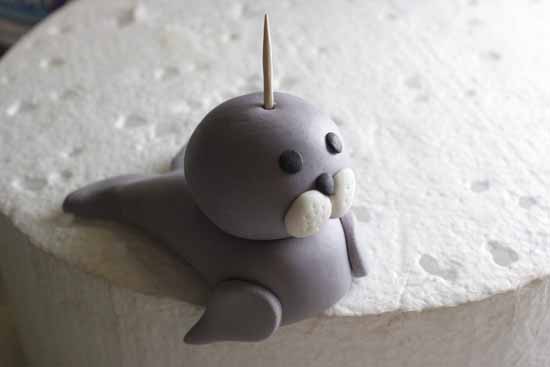 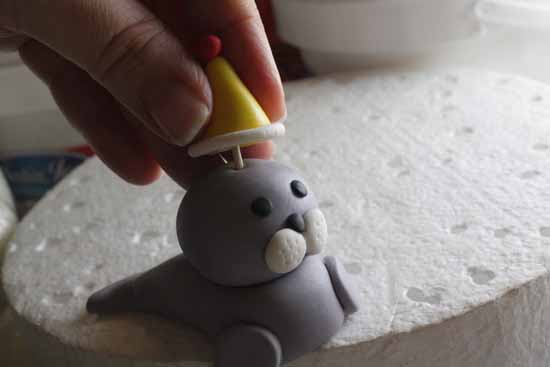 Let him dry or harden overnight or at least for a few hours and you’re done!