My Little Pony Cakes: Our Favorite Ideas for This Tasty Treat

Whether it’s your daughter who loves My Little Pony, or big, burly Brony that you like, finding perfect, My Little Pony Cakes is a must-do for this year’s calendar of celebrations.

My Little Pony has been around since 1983 when the first My Little Pony toy came to the market. An entire line of toys was launched a year later.

Between the inception of My Pretty Pony, the original behind the My Little Pony toy idea, and now, there have been three animated television shows and a few films.

The current, popular series, My Little Pony: Friendship is Magic, regained popularity for the line. It was lost during the nineties when Hasbro discontinued the toys.

This simple but classy My Little Pony Cake you can bake up for someone’s special day comes from Kidspot.​ 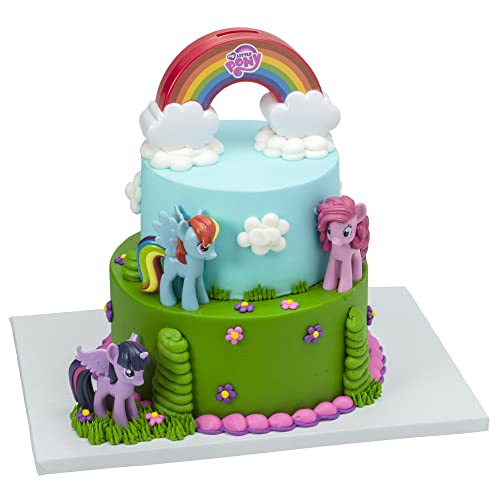 Other My Little Pony Cakes You Can Make

If you have a particular flavor in mind for your cake, you can always substitute the above recipe for that one. Or, if you’re not sure which flavor to choose, here’s a list of some amazingly delicious options.

Frosting flavors to consider could include any of these favorites:

You can always make other styles of My Little Pony cakes.

One option is to make the cake into the shape of My Little Pony. There are various instructions online for this more elegant option.

There are also My Little Pony cakes form pans for those of us without so much time or talent.

However, you can make  My Little Pony Castle Cake. Use layers of cake of different sizes to off-set and create the shape, leaving different platform levels. Place multiple My Little Pony figures on and around the castle, and top the whole thing with a fondant rainbow arch.

Additionally, you can read our 3-part tutorial post on how to make a castle cake.

You can also bake a simple cake and decorate it with edible icing sheets. They are very decorative and incredibly easy to apply on the cake.

Or, if you’re exceptionally talented or at least brave enough to try, you could make a standing My Little Pony Cakes figure.

Not only that but you could also make a scene from one of the birthday girl’s favorite episodes. Provided that you might have to get a little creative in finding the supplies. But if you pull it off, she’ll never forget it.

In addition, you can take the simple approach and make a multi-tiered cake and top with a single My Little Pony figure.

Color each layer a different shade, and cascade a wall of flowers down one side for a truly unique and less complicated My Little Pony cake that’s Instagram worthy. 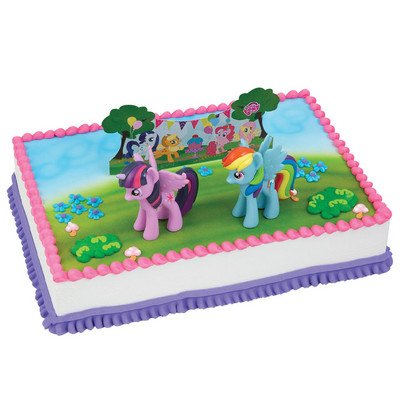